A Touch of History

Sometimes you come across something special that is worth sharing.  The first picture below was taken today of #13 Green, and the second we are not sure of the exact year it the photo is from.  It is very interesting as you compare the 2 photos, how the area has evolved over time but still maintains the same landscape characteristics as the original design. 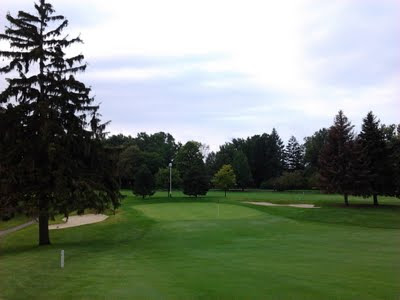 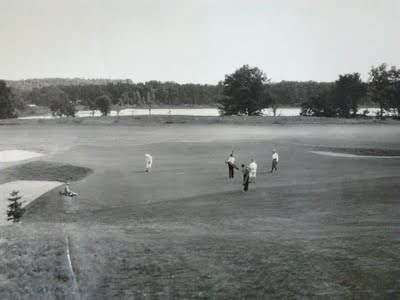 The 2011 Arbor Day Event will be held on Sunday September 11th.  The event will take on a similar format to the last couple years where golfers will represent their University of choice and play for braging rights.  Last year MSU, U of M and Notre Dame were represented, with U of M pulling out a slim victory.  Arbor Day is a great way to show your support for the golf course, raising funds for new trees and plants and beautification projects.

Below are some pictures of the plantings we were able to do on the golf course this spring with funds raised from 2010 Arbor Day event and donations.  Not included in the Photos - Austrian Pine #14, Shrubs #1 Ladies Tee, Forsythia at #10 Tee 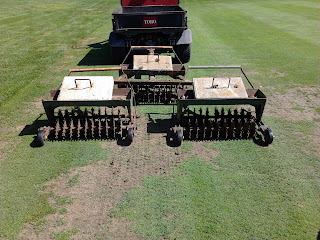 Overall the course is in very good condition and has faired well through some tough temperatures and conditions we experienced this summer.  During most years we will suffer small areas of turf loss from compaction, heat stress and turf grass disease pressures.  These areas will start showing showing recovery soon, as the days become milder and overnight temperatures decline, improving growing conditions. 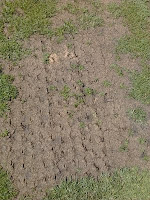 To help out with the recovery process we have started spiking our fairways that have become thin or or have bare spots.  The slits from the spiker  1-2 inches deep and an inch long penetrate through the thatch and compacted ground.  This provides an area where water, air and light can penetrate the soil allowing new seed to germinate, and giving weakened turf plants space to grow and obtain nutrition.  The slits are hardy noticeable and the overall process is very non-obstructive to the playing surface as shown in the 2 photos.
Posted by Greens Committee at Monday, August 22, 2011

The temperatures in the 90's from July have moved away and we are currently having milder temperatures during the month of August.  Although the course has weathered well during the extreme weather, some of the injury caused to turf by heat stress and turf diseases has started showing up.  Damage showing up in fairways is primarily a result of "summer patch", which effects Annual Bluegrass during late July and August when day and nighttime temperatures are high.  This disease will show up as yellowing turf and die back later as shown in the photo of 13 fairway.  We do apply fungicides to control this disease but we do still experience some injury. We also have some turf damage in areas that was caused by excessive moisture coupled with heat stress. Over the next couple of weeks we will be aerifying and top dressing these spots to relieve compaction and promote recovery.
The greens are also showing signs of summer stress, becoming very compacted from maintenance and play.  The rains that we received over the last week, further increased the compaction.  We will be venting the greens with small 1/4 inch tines to relieve compaction and allow oxygen and water back down into the soil.  This will help the root zones of these greens which become very shallow during July and August.
August rains and cooler temperatures have also lead to very thick roughs which are growing rapidly.  The maintenance crew has been working hard on mowing the roughs and trying to disperse the clippings.
Posted by Greens Committee at Saturday, August 13, 2011

﻿ Over the last couple months playing the golf course you may have noticed injury to some of our conifers on the golf course, mainly Norway Spruce and White Pine.  In most cases this injury has been caused by a herbicide "Imprelis" used to control weeds in the roughs throughout the golf course.  Imprelis is a new product released on the market for golf courses and landscapers and has done a great job controlling weeds. Unfortunately "Dupont" the company that released this product was not aware of the severe effects it could have on these tree species.

Currently Imprelis has been removed from being sold and Dupont is working on correcting the situation.  They will be sending arborist's to all golf courses and landscapes that have reported claims about problems.  These arborist's will analyze the trees and their injuries as well as take soil samples.

Forest Lake C.C. has notified Dupont and we are currently waiting for our site evaluation.  Since there is varying severity of injury to different trees on the course, we remain optimistic that some trees will rebound, while others may have minor pruning to improve tree health and aesthetics.