Over the past few weeks the greens crew has planted 20 new trees on the golf course. These trees were hand selected from a local nursery by the greens committee.  All new trees that have been planted over the past few years were picked for their desirable traits, hardiness and to add diversity among the forest at FLCC.  Planting locations were determined from the course Master Plan as well as replacement in some instances of tree loss.

Until these trees start to mature we will continue to protect the bases with mulched rings to prevent mechanical damage such as mower and line trimmer damage.  Also young trees will have a black stake placed in close proximity to the tree, putting  the following "local rule" in place. 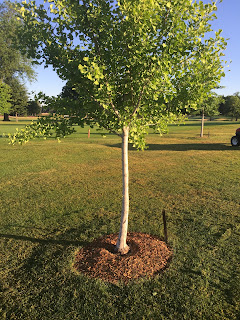 The player must take relief from all black-staked trees with regards to normal stance, swing, and club selection.  The player is allowed to lift, clean and drop the ball without penalty within one club-length of the nearest point of relief not nearer the hole.

Any questions on this rule or farther explanation of rules on the golf course, can be answered by our PGA golf professionals.

New arborvitaes were added to the back of #10 Tee.  Due to road salt and winter injury there were several poor quality arborvitaes that were removed.  The new plantings should grow fairly quickly and help out with  road noise and visual distractions.

Sometimes it is amazing to try count up the man hours needed to have "pristine" bunkers.  Although defined as a hazard, expectations of the modern player forces this golf course feature to be in perfect shape.  Bunkers  fall in line behind our putting surfaces for the amount of time involved to keep them playing consistent.

During the spring  the greens crew spent considerable time in addressing bunker deficiencies.  The areas that we focused on;

1) Sand depths.  Our Goal was to have a minimum of 4" of sand depth on floor of the bunkers.  After surveying the bunkers we found about 50% of our bunkers were deficient in this area.  Bunker sand becomes displaced by golfer play, maintenance cleaning of bunkers as well as environmental factors such as wind.  Some bunkers were able to be fixed fairly easily by relocating existing sand from an area of surplus sand to an area of need.  To address major deficiencies 100 tons of new sand was dispersed in those areas.

2) Grass faces.   As our bunkers age they present some management challenges.  Most of our bunkers were designed with steep greens side grass faces and shallow sand bottoms.  Over time from sand exiting the bunker from golf shots and wind these grassed faces become worn and the turf becomes thin.  Coupled with the exposure to summer heat it poses a challenge to meet the water requirements in these areas.  The greens crew have sodded major flawed areas, and minor problems are being addressed with extra fertility and hand watering.

3) Bunker Edges.  The maintenance of our sand traps involves keeping a manicured crisp edge.  This spring all the bunkers were hand edged to restore there appearance, eliminating grass encroachment.  In-season minor string trimming edging is preformed every 1-2 weeks to keep up there appearance.  Overtime the edging process has changed our grass faces into sand faces on the course.

4) Drainage.  Bunkers and bunker sand is designed to have a very quick infiltration rate.  Our bunkers are designed with native soil sides and bottoms with pea stoned drainage lines running through them.  This system has worked adequately, but after 20+ years since construction we have some failures and  bunkers will puddle. A couple of key factors that cause this include;  the drainage piping system being broken or clogged, as well as the contamination of bunker sand with soils from bunker face erosion.

After rain events these bunkers became a maintenance nightmare, as water puddled in the bottom of the first bunker, and the second bunker as well staying wet.  We decided it was time to fix the drainage in these bunkers.  During this process all of the existing sand was removed, and the bunker  was best restored to original design. 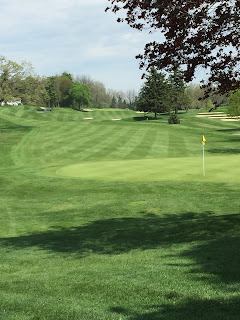 It has been over 6 months since our last blog post, but again this season we will be using our blog as 1 means of communication for golf course related issues.  The content through the summer will include projects, course photos, and many things that you may not of seen during the course of the 2016 season.

As most of our FLCC members have returned for their winter retreats the exciting  news is there was no winter injury to the golf course.  Most of this can be correlated with the mild winter we experienced in Michigan.  Although we are off to a very good start with course conditions, the bigger challenge this year is the cooler spring that we have be witnessing thus far.  But rest assured the temperatures are on the rise and we can see temperatures steadily climbing into warm consistent temperatures.

The photo of Hole #15 on the right is a great indicator on how grass looks at the moment.  Extremely lush and growing rapidly.  The greens crew has their hands full in keeping up with the rough  at moment.  The rough this time of year involves and extra mow per week, as well as a cleanup crew blowing around clippings and picking them up in certain areas.


We have also entered into the seeding period for Annual Bluegrass (POA).  We do try to control POA from producing seed head with growth regulators but in the best of seasons control it is not 100%.  The seeding period will be most pronounced over the next couple weeks.  What you may notice is some slight chattering (bumpiness) of putts, most noticeable in the late afternoon.  We will be doing many mechanical processes over the next couple weeks from verti-cutting, brushing to topdressing to create the best possible putting surfaces through this period.  Greens speeds also tend to slow down a little bit during the spring, as the POA greens want to aggressively grow.


The strength in details makes a good golf course great.  There are a lot of projects and maintenance work that goes unnoticed but takes up a tremendous amount of time.  Below I would like to briefly share some of the course work that happened so far this spring.

A special thank you for this years 2016 greens crew for their efforts to continuously take FLCC to a higher level.